How to Spot and Remove Fake Google Reviews in 2023 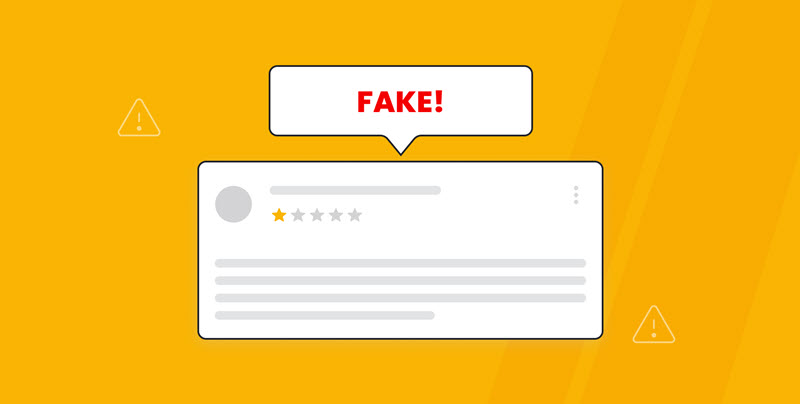 We all know how effective positive reviews are for improving a business's online reputation. However, among all the positive, legitimate customer comments, fake Google reviews have gained momentum.

The simple truth is that fake Google reviews can damage a business's reputation and lead to losing potential customers. While these fake reviews are becoming increasingly difficult to spot, there are some steps you can take to identify them and remove them from your listing.

The information below will provide the facts about false reviews published on Google business profile. We'll teach you how to recognize false reviews, how to remove false reviews on Google and the proactive measures you can activate to build your online reputation to counteract these fake reviews.

For the most part, Google reviews are considered by users to be exceptionally reliable. However, the onslaught of new fake reviews can cause a whole slew of problems for businesses and their customers.

As online scammers become increasingly clever. They are using fake reviews to discredit small businesses, when they are paid by competitors. Although these overseas companies have learned to fine-tune their shady operations in publishing false reviews for paying clients, Google's AI is not too far behind the learning curve.

However, not only can fake reviews mislead potential customers, but they also undermine the trust and reliability of the platform itself. This is especially true now as reviews can positively impact SEO.

Customer reviews are a precious tool for acquiring new leads. They provide potential customers with first-hand information about how well your product or service actually performs, as opposed to just what your marketing material says.

This can be a make-or-break factor in deciding whether or not to do business with you, so it's important to encourage your past and current customers to leave reviews.

However, false reviews can have a significant adverse impact on your new customer experience when they read your business reviews.

The main problem is that a business doesn't have the power to remove fraudulent reviews themselves. It's quite the process – and for many business owners, it's more trouble than worth the effort.

How to Spot Fake Google Reviews

As much as scammers and unethical business operators think they hold an advantage over Google and can publish as many fake reviews as possible - the facts suggest otherwise. Written reviews that are false are easier to spot than fake 5 star Google reviews.

However, here are a few ways you can spot reviews that are not genuine.

1. Pay Attention to the Small Details

While there are legitimate negative reviews, false reviews tend to skip the specifics. For example, if a negative review appears for a local Mexican restaurant in Denver, Colorado.

Most legitimate negative reviews will mention details like what they ordered, who they interacted with, or specific details about their user experience. Fake reviews tend to take a broad approach.

They'll suggest that "this business offers horrible customer service" and leave it vague. Honest reviews would mention the details.

For example, they'd continue, "we ordered a taco salad and asked for no tomatoes, as my husband is allergic. Not only did they bring the salad with tomatoes, but they refused to take it back without charging us for a second salad."

So - when you are reading negative reviews or a star rating, look into the details about the post, as that will likely provide valuable information about its legitimacy.

Most firms or agencies that sell fake reviews for a business or its competitors operate overseas. As a result, English is typically not their primary language - and it is showcased in their written reviews.

If a review has multiple basic English grammatical or structural errors, it's a good bet that it's false.

Every professional writer understands that exclamation points are a cheap way of gaining attention. And so do fake reviewers. Their posts will typically include multiple exclamation points - especially if they are trying to highlight negative feedback.

But - beware, this same concept also works for the overly positive feedback and star reviews.

Most fake reviewers use the same Google account to do their dirty work. One tool that Google permits all users to help build the credibility of their review platform is to permit other users to review all previous posts.

Review the user's previous posts if you notice a review is exceptionally harmful. If there is a common theme with all their posts, don't be afraid to report the post as being fraudulent.

How to Remove Fake Google Reviews

If fake reviews are, unfortunately, posted for your business - all is not lost. You can still take action to remove fake reviews from Google and protect your reputation. But here is the catch - you can't physically remove the post alone.

Google protects the privacy and legitimacy of ALL users' opinions - even if they are not published with factual data.

Here are the general steps you can take to attempt to have the review removed from your Google business profile.

This technique is often reserved for a business that takes the time to proactively respond to a negative user experience. If they can resolve the problem, the business owner is entitled to ask the original author to remove or edit their review.

Step 2 - Flag the Post for Removal by Google Moderators

The second step is to flag the review as fraudulent. However, if you're going to do this, you need to be prepared to provide facts to support your conclusion.

Another common tactic is to increase the number and quality of positive reviews from legitimate reviewers on your Google page.

When you increase the number of reviews and respond to positive reviews, Google rewards you by improving your search rankings.

Leverage feedback and reviews to improve your online reputation

Get more online reviews and turn your customers into raving fans with ReviewsOnMyWebsite review generation software.

How to Report Fake Google Reviews

If you have attempted the steps above and nothing has worked - there is one last option. You can take time to report fake Google reviews by going directly to Google's website.

Google allows any user to flag content as being fake or deceptive. Ensure that you provide a valid reason and evidence to support your claim - otherwise, it might not be accepted.

Here is how to report a Google review.

Step 1 - Flag the Review to Google on Your Desktop Device

Due to its limited bandwidth on mobile devices and its app, Google only allows users to flag reviews via their desktop version. You'll have to open the review on your browser to accomplish this. You'll notice a flag on the side of the review. Click this flag to 'report the review' for removal.

Step 2 - Flag the Review from Your Google Business Profile

You can flag an undesirable review from your Google Business Profile dashboard. Simply log in, click on the reviews tab on the left menu, and select the flag icon next to the review.

Step 3 - Gather Your Facts for Follow-Up

Google is going to make it challenging to remove a review. In fact, they usually put proof of fault on the user making the false claim.

To prepare for this inevitable contact, collect vital information that will support your case.

You might have to contact Google's support team directly if you haven't received a response after a few weeks. Most businesses will send a direct message to support - but this often falls on deaf ears.

How Does Google Detect Fake Reviews?

To ensure a fair and honest platform for all users, Google algorithms actively monitor fake reviews. They use automated solutions and human moderators to proactively detect false reviews published on the platform.

Some of their tactics include:

Spotting fake Google reviews can be tricky. But rest assured, fake reviews hurt Google and its credibility as much as they can impact your small business.

What to Do if Google Doesn't Remove a Fake Review

If Google doesn't take action against fake reviews, you can still attempt to mitigate the damage that fake reviewers have caused.

Try responding to fake reviews politely and professionally. Use facts, ask for specifics about the users' negative experience, or address their concerns offline via private messages.

You can also activate a reputation management strategy by increasing the number of positive reviews.

Leverage feedback and reviews to improve your online reputation

Get more online reviews and turn your customers into raving fans with ReviewsOnMyWebsite review generation software.

With this strategy, you can take advantage of reputation management software such as ReviewsOnMyWebsite to send out email and sms review requests with direct links to your Google Business Profile to make it easier for clients to leave a review.

This is arguably the best way to drive down fake negative reviews on your profile.

Just because a review doesn't positively highlight your business does not mean it's a fake review. In fact, negative reviews posted by your legitimate customers raise an alarm that potentially there are issues your business should consider improving.

That said, a growing number of fake reviews are being published on Google Maps business listings. Some are overseas agencies paid by competitors to negatively impact public opinion. Others are online trolls seeking attention.

Nevertheless, it's essential as a business owner to take these fake reviews seriously - and activate strategies that will diffuse them.

Yes. Fake Google reviews are considered false advertising, which is illegal according to the FTC. In fact, several companies that have been caught trying to boost their credibility through paid endorsements on Google have been penalized by Federal fines and penalties.

What percentage of Google reviews are fake?

When to respond to fake Google reviews?

It's best to be proactive and respond to fake reviews as soon as you spot them. This will demonstrate that your business is against fake reviews and tells potential customers that you are taking care of any bad publicity. It's also essential to take the time to understand the source of fake Google reviews to prevent it from happening again.

How to respond to fake Google reviews?

The best approach when responding to fake Google reviews is to remain polite and professional. Remaining composed is essential when dealing with fake reviews, as it will show potential customers that you are not taking criticism personally. You can also request evidence of their stay or service or ask them to contact you directly so you can discuss the issue privately. This can help you resolve the issue before it becomes public and damage your reputation.

How to find out who wrote a Google review?

Google does not allow businesses to find out who wrote a fake review. The users' private contact information is not displayed on their Google account profile - unless they advertise their personal information. You can review the users' previous reviews to determine if they have a history of posting negative reviews or if their reviews are not legitimate.

Can you sue someone for a fake Google review?

Yes. Depending on the circumstances, you may be able to sue someone for posting fake Google reviews about your business. If the fake review was posted maliciously and caused damages to your business, you may have a valid legal case against them. However, it's nearly impossible to locate the identity of a Google reviewer, so it would be difficult to serve them with legal documents.

What is considered to be online defamation?

Online defamation is any false statement that harms the reputation of an individual or business. This can include fake Google reviews, social media posts, and fake news articles published online. If you believe someone has posted fake content about your business, it's crucial to take action and seek legal help if necessary.

Get Your Free
Online Reputation Report

Discover how your business stacks up against the competition!

Why is My Google Review Not Showing Up? 7 Reasons & What to Do 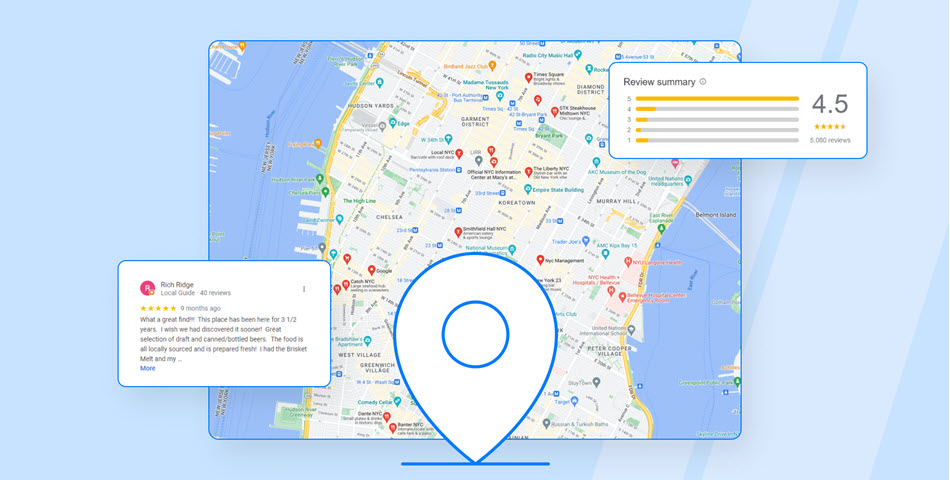